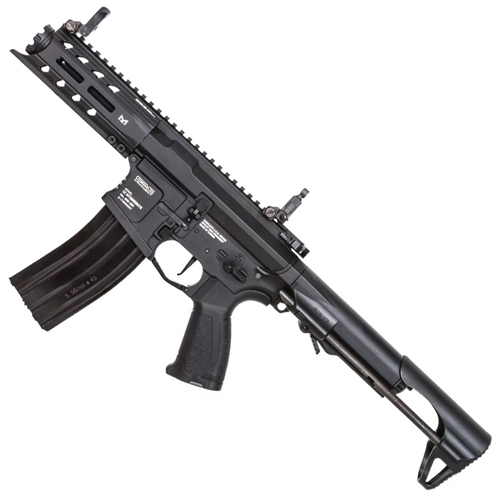 Success! An email will be sent to you as soon as this item is back in stock.
Ooops. There was an error processing your request. Please contact customer service.
More from G&G Armament

The ARP 556 is a little monster. This extra-compact CQB style AEG is the burly bigger brother of the ARP 9. Unlike the smaller model, the ARP 556 has a full metal receiver and accepts a higher capacity M4/M16 style magazine. The front end is loaded with an M-LOK handguard and an eye-catching crown flash hider that amplifies sound. A pre-installed MOSFET and ETU provide lightning fast response to the flat trigger and allow for programmable 3-round burst firing mode. Bringing up the rear is a skeletonized PDW stock that provides extra stability while keeping the gun's overall weight down. Batteries and charger not included.