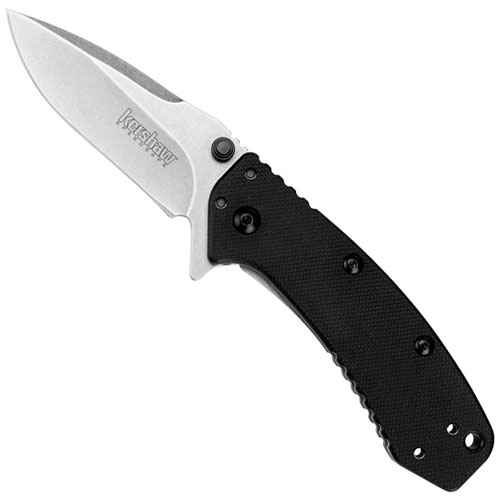 Success! An email will be sent to you as soon as this item is back in stock.
Ooops. There was an error processing your request. Please contact customer service.
More from Kershaw Knives

The Kershaw Cryo, designed by Rick Hinderer, is one of Kershawâ€™s best-selling knives. And now it's available with one of our customers' most-asked-for modifications: a G-10 front scale. This new Cryo not only looks good, it also offers the extra grip some of you have been asking for. The G-10 scale also lightens the overall weight of this very practical knife. The Cryo was the result of collaboration between Rick Hinderer and the design and production engineers at Kershaw. Itâ€™s designed to satisfy usersâ€™ craving for a Hinderer knife, but at a price that meets the demands of their wallets. The original Cryo (model 1555TI) was selected as a Blade Show â€œBest Buyâ€ and as Menâ€™s Journal Approved Gear. Like all Cryos, the G-10-handled Cryo is equipped with SpeedSafe assisted opening for smooth and easy one-handed opening. Access it with the built-in flipper or thumbstud. The blade steel is heat treated to Kershawâ€™s exacting standards. The handle has a G-10 front scale with a stainless steel back. A sturdy frame lock secures the blade open during use and a Hinderer lockbar stabilizer ensures the lock doesnâ€™t over-extend. The new Cryo G-10 is equipped with a four-position deep-carry pocketclip for maximum carry flexibility and discretion.