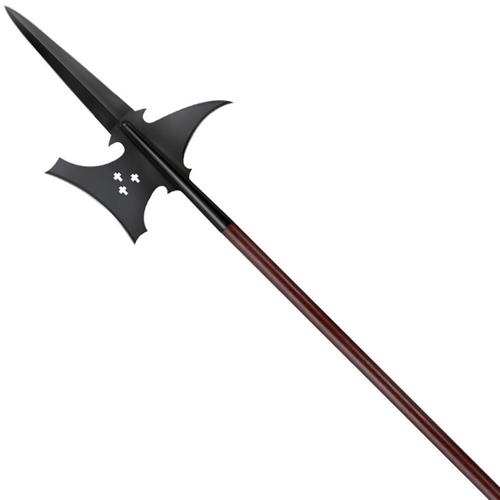 Cold Steel President Lynn C Thompson has long been fascinated by Pole Arms, Spears and Halberds. The Sergeant's Halberd is often seen as a ceremonial item, carried as a badge of rank by officers and NCOs alike in the 18th and 19th Century, it was a much feared weapon of war as well. Unlike its heavy-duty brethren (see Swiss Halberd) the Sergeant's Halberd was actually developed during the age of firearms and was designed to face foes with less protective armor. Lighter, faster and more maneuverable, the Sergeant's Halberd is a deceptively quick and astonishingly effective weapon. This interpretation of the Sergeant's Halberd is representative of the battlefield incarnation of this historical tool. Though it features costly but attractive embellishments and ornamentation, it is a true warrior through and though. Fully sharpened and surprisingly rugged and durable, it can be used as a spear for thrusting, a hook to catch, trap and entangle and as a cutting tool to chop, cut and slice! The Sergeant's Halberd is a perfect addition to the collection of any historical re-enactor or Western Martial Artist and it makes a terrifically effective emergency self-defense tool when your life is on the line.