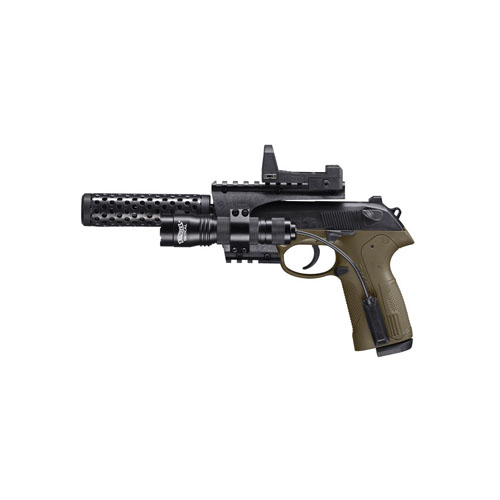 Success! An email will be sent to you as soon as this item is back in stock.
Ooops. There was an error processing your request. Please contact customer service.
More from Umarex

This recon version of the popular Px4 Storm pistol by Beretta includes a tactical 4-sided accessory mount, removeable tactical compensator, Walther green illuminated point sight, the Walther Shot Dot, and a Walther Tactical Flashlight with grip switch. The Shot Dot sight has two brightness settings and the flashlight can be used without the grip switch, and the batteries are included. Perhaps one of the best balanced air pistols with blow back action, the Px4 featurs a slide that actually cycles. This Beretta BB pistol also doubles as a pellet gun and is a great air gun for anyone just looking for fun shooting and especiallly for those that own an actual Px4 firearm. The Beretta Px4 Storm Recon is very similar to the sidearm, making it a great pistol to practice safe handling and to target shoot with. This Px4 Storm utilizes a "double ended magazine". It has two 8-round rotary clips at either end of the magazine. Shoot 8 shots, drop out the magazine, flip it over, and shoot a second eight before having to reload the mag. Plus, the magazine will hold both pellets and BBs! Since this BB and pellet airgun is so much fun to shoot, you'll want to stock up on quality BBs, pellets, and 12 gram CO2 cylinders. You should probably ad an extra Px4 magazine as well. Umarex 2253012