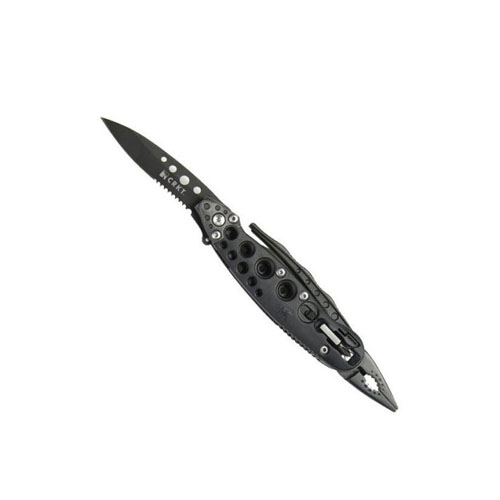 Launce Barber and Tom Stokes designed the patented* Zilla-Tool™ Jr. as part of our innovative I.D. Works™ line of tools. It is a slightly smaller and lighter version of the original Zilla-Tool, which makes it easy to carry while retaining high utility. The Zilla-Tool Jr. 9065K features a black-on-black non-reflective tactical finish. The pliers jaws are spring loaded, with a slight needle nose taper. They have both fine flat and circular toothed gripping surfaces. Near the base of the pliers, is a very useful wire cutter, and also a notch near the handle for wire stripping. You can store the two screwdriver hex bits in the Zilla-Tool Jr.'s handle reliefs. It also accepts other standard hex bits with the help of an adapter. To open the knife blade quickly, just press the little "flipper." It also acts as a blade guard when the blade is open. Metallic surfaces are black EDP, while the Zilla-Tool Jr.'s rugged scales are injection molded black glass filled nylon.