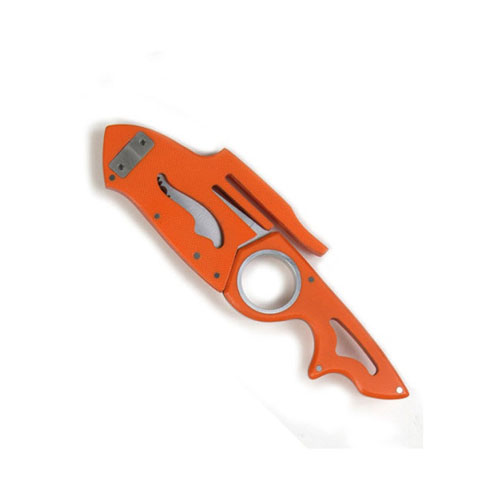 Terry Renner, custom knifemaker and owner of TR Blades in Palmetto, Florida, is becoming well-known for his high-end folders and art knives. But he has a fertile mind, and the idea for the Neckolas came while he was toying with an index-finger-ring folder design. He says, "Rather than discarding the 'Hole Idea,' I thought of the fixed blade format, which led me to design a locking sheath which could be manipulated with one hand." The result is the Renner Neckolas™ knife/sheath system. The orange 2391 features a blunt tip and full Triple-Point™ serrations for use as a whitewater and extrication knife. It will quickly cut through cord and seat belts without tip penetration. The knife features a full-tang premium 8Cr13MoV stainless steel blade, sandwiched between resin impregnated fiber scales and held securely by stainless steel pins and the finger-ring insert. As a result of this skeletonized high-tech construction, the knife weighs only 1.2 ounces. The Neckolas sheath is really the secret to the system. Terry says, "I wanted a retention system that would release and capture the knife with the same motion. It occurred to me that composite materials would allow the sheath to act as its own retaining spring. The key to easy re-insertion is the thumb notch on the sheath top edge. Just insert the blade into the sheath and 'pinch.' The knife clicks into place. To release the knife and draw it, just 'pinch' the springbar extension with your thumb, which allows the blade tang notch to clear the sheath's retaining pin momentarily."