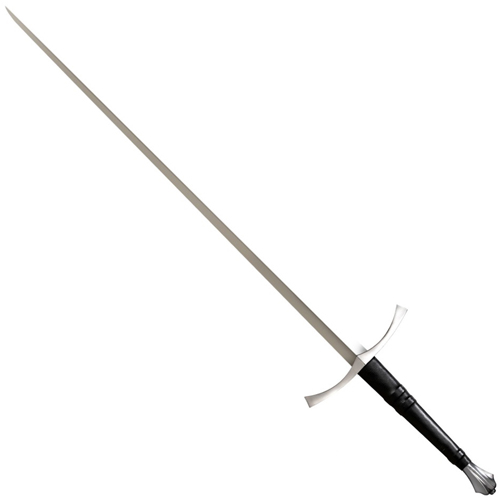 The era of the long sword spanned almost three centuries (approximately 1350 to 1650). This, undoubtedly, was because it really worked! It featured a distinctive cruciform hilt and a long, double edged blade and was equally adept at opposing both light and heavily armored foes. You see, its extra long blade offered the reach and leverage for powerful stabbing, cutting and chopping strokes while its long cross guard and heavy pommel were useful for hooking, striking and smashing. When heavy plate armor was encountered, blows with the edge were marginally effective and were often abandoned in favor of a "Half-Swording" technique; where one hand grips the hilt and the other the blade to better direct the point in powerful jabs, and to more accurately thrust at the small gaps and joints present in a suit of armor. Having read S.M. Sterling's "Change" series of science fiction novels about a world that loses 600 years of technological evolution overnight (an event called "The Change") at least a dozen times each, has left our President Lynn C. Thompson quite taken with the many virtues of the Long Sword and inspired him to make a Cold Steel variation. Modeled on the Italian concept of sword design, the blade and balance slightly favors thrusting attacks, however, its cutting edges are astonishingly effective too and can deliver some down right ferocious blows. Additionally, its simple cruciform hilt is also all business with a long upturned cross guard, leather-over-wood grip, and a counter balancing fish tail pommel. Fast as a frog¹s tongue the Italian Sword is deadly in a fight and built like a tank. ITALIAN LONG SWORD DAGGER Since our Italian Long Sword is light and well balanced enough to use in one hand we thought we'd offer a companion dagger to take the place of a shield, targe, or buckler. Scaled down in size but almost identical in appearance, its sharply tapered, double edged blade slightly favors attacks with the point over the edge and is stiff and strong enough to parry any sword.