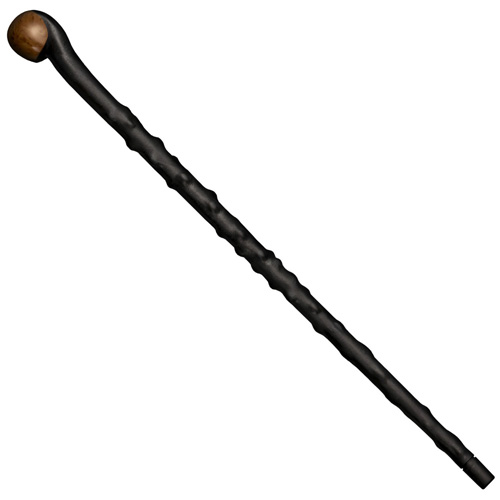 The Blackthorn bush is found throughout Ireland and the British Isles. It has been prized for centuries as a material for premium walking sticks. The original Blackthorn sticks were 2 to 4 foot long Irish shillelaghs (the national weapon of rural Ireland). In expert hands the shillelagh was so fearsome that during the final occupation of Ireland, the English outlawed it. To get around the law, the Irish turned the shillelagh into a 3-foot walking stick. The English didn’t want to appear unreasonable by outlawing walking sticks too, so the Irish kept their modified shillelaghs and the world gained a beautiful and functional walking stick known simply as the Blackthorn. Cold Steel made the effort to obtain and sell authentic Blackthorn sticks over fifteen years ago, but the venture turned out to be disappointing, and not because the sticks didn’t sell well. It was because Blackthorn is difficult to come by and, since it’s grown and not manufactured, it is somewhat inconsistent in quality. Cold Steel’s recent forays into injected molded polypropylene products has yielded some impressive results and now we have produced a new polypropylene Blackthorn that has all of the advantages of real Blackthorn and none of its pitfalls.